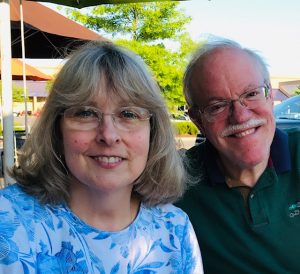 As a quilt designer, teacher and author, Michele has always been involved in sewing and crafts even as a young child. Her “first business” was weaving potholders and selling them in her neighborhood. She started sewing on her grandmother’s Singer featherweight making doll clothes when she was 9. Her brother, Tom, gave her an updated Kenmore sewing machine when she was 12, and then she started sewing her own clothes after taking home economic classes in junior high. Besides sewing, she learned to knit, crochet, and embroider – basically anything to do with a needle!

Michele met Tom Crawford, the love of her life, the night before the first day of college in 1972 at Miami University in Oxford, OH, and became a “team” when they were married in October 1976. Michele was an elementary teacher in Sandusky, OH for 4 years until their first son, Myk, was born, and Michele became a “stay at home mom” with the encouragement of Tom. They had 3 more children: Kevin and David, the twins; and Kelly. Since 1980, she has always had a home-based quilting business which has evolved over time. She is blessed to have her family revolve around her business and her business around her family.

From 1980 -1987 she operated, The Stork Port, where she sewed items for babies and children that were sold at craft shows in Ohio and Washington. In-between she began taking quilting classes in the early 1980’s (B.R.C. – “before the rotary cutter); and remembers making templates out of cereal boxes, sandpaper and plastic margarine tub lids.

After moving to Spokane in 1986, she joined several quilt guilds and met a variety of designers including Debbie Mumm. She was encouraged to begin creating her own designs combining counted cross stitch and quilting which lead to her next business, Cross ‘n Quilt in 1987. Her patterns were sold in stores across the country, and Keepsake Quilting.

Beginning in 1989, Michele began designing cross stitch, fabric crafts and quilting designs (over 4500 to date) for a variety of needlework and quilting publications plus designing with and for 35 different thread, batting and fabric companies. In 2004, she began to offer quilt kits featuring her designs with new fabric collections in quilt
magazines; and then started her internet store, Flower Box Quilts.

Her quilt pattern line, Flower Box Quilts began in 2007; and then she and Tom started traveling and vending at quilt shows mainly on the West Coast. In 2010, they eventually bought a 31 foot RV Toy Hauler where the back 1/3 is a mobile quilt store. Michele and Tom have traveled over 100,000 miles together (as of January 2020) through a variety of states in their RV along with their golden retriever, Molly; Max, their former cat; and now Abbie, their current cat to happily vend at quilt shows.

Since 2009, Michele has been teaching quilting classes and presenting lectures at shows such as HMQS; Quilt Reno; NW Quilting Expo; Rocky Mountain Quilt Festival; Road to California; Sewing and Stitchery Expo; Rusty Barn shows; AQS Paducah; Quilt Festival Houston; and a variety of quilt guilds. She loves to interact with quilters, and share her tips and techniques when teaching.

When the pandemic struck in 2020, Michele decided that summer to begin a new chapter in her business career; and began to learn how to teach virtually from her home. She has a set-up in her sewing studio with a 3 camera set-up to connect to teach either through virtual shows such as Road to California in 2021; and began teaching directly to students virtually in April 2021.

When Michele and Tom are not on the road for Flower Box Quilts, they love to spend time with their 4 adult married children; and their 6 grandchildren. When she’s not teaching, designing, sewing or writing directions, Michele loves to read, watch HGTV, swim, and travel (especially to visit her family). Tom still works full time; and is extremely skillful in being able to fix anything around the house. After nearly 45 years of being married, they are still each other’s best friend, and are blessed to be able to live and work together!